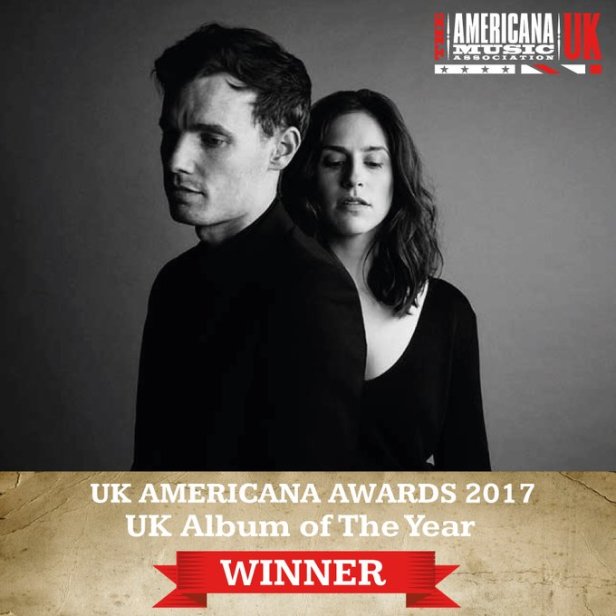 I’m delighted to welcome Lewis & Leigh to play Saint Mary’s in Billericay on Saturday 25 February 2017. They’ve been on my radar for quite some time having received great press on the UK folk scene. I’ve had their Americana Music Association UK nominated debut album ‘Ghost’ for a while and I particularly enjoyed their set supporting  Deacon Blue on their UK Tour at the Royal Festival Hall in November 2016 – I knew immediately they would be well received by an appreciative Billericay audience! Saint Mary’s will showcase Leigh & Lewis’ songs and harmonies beautifully.

I’m very pleased they’ve agreed to squeeze in a visit to Billericay on their forthcoming tour, their only Essex show.  This is one not to be missed – but I say that all the time don’t I?  Do please ‘pass this on’ to anyone who you know might be interested – it didn’t make their initial tour publicity because it’s a late addition to their schedule.

‘Whispering’ Bob Harris is promoting them and has them on the same bill as Robert Vincent – who played a storming set here in May 2016. If you enjoyed Rob, The Lake Poets and Tinderbox you’re sure to enjoy Lewis & Leigh. In fact, be sure to look them up on BBC iplayer under Quay Sessions and enjoy a fantastic short set. They do a mean Deacon Blue cover too!  It’s no surprise they are also nominated for best UK artist and best song ‘4:19’ at the UK Americana awards along with best album

So, who are Lewis & Leigh?  Al Lewis hails from Wales and Alva Leigh from Mississippi, USA.  Their collaboration began in 2014 when the then solo musicians first began writing together.  In 2015 Lewis & Leigh flew the flag for the UK at the Americana Music Festival in Nashville and were named ‘artists to watch’ by Rolling Stone and NPR. They were invited back in 2016 by the Americana Music Association to perform an official showcase with support from the Wales Arts International Fund.

Their debut album ‘Ghost’ was recorded in January 2016 at Urchin Studios in London with Matt Ingram and released on Celticana Records in August 2016. ‘Ghost’ is a stunning collection of self-penned originals and celebrates the differences in their individual experiences whilst finding common ground.

They’ve hit on a simple formula: reserved and minimal backing … harmonies that are both dark and sweet. Q Magazine ****

Three well received EPs have built a growing following and Lewis & Leigh received two nominations (Best UK Song & Best UK Act) at the inaugural UK Americana Awards in 2016.  A stand out acoustic performance at that event led to invitations to join Billy Bragg’s songwriters’ round at Glastonbury (where they were the only artists playing two shows – the Acoustic and Leftfield stages), to open shows for Deacon Blue and to make a return visit to the US Americana Festival in Nashville in September.

They’ve played some amazing festivals over the last two years such as Glastonbury, Celtic Connections, Cambridge Folk, and Greenbelt – you can add Billericay to that list now!  They have performed live radio sessions with Dermot O’Leary and Janice Long on BBC Radio 2 and Ricky Ross on BBC Radio Scotland. In August, they took their first promo trip to Germany, visiting FLUX, RadioEins, PULS studios and performing on Inas Nacht. The album was also No: 1 on the Amazon Folk chart pre-order.

SUPPORT
Will be from Annabel Carr and Gary Cunningham. Founder members of the previously well received ‘The 45s’ Annabel has been singing alongside Dan Pierce (who acted as support at a couple of gigs in 2016) and Gary plays in a number of Bands around Essex.  They will play a mixture of Soul, Blues and Classic pop hits in their own imitable style with a few originals thrown in too!

TICKETS
Are £12, under 16s £6 & Fees.  If not sold out, tickets will be available on the door at £14/7. There is general ‘Café Style’ seating (with some standing if numbers are high) and are available from http://www.wegottickets.com/event/385896

Saint Mary’s is a 5 minute walk from Billericay station (only 25 mins from Liverpool Street) and there is ample parking off the High Street (behind Iceland). We are also only 5 mins off the A127 or 15 mins off the A12.  You can find us on a map here

There will also be a very reasonable priced ‘Honesty Bar’ selling wine, beer and soft drinks!

Any proceeds from this event will go to Charity (TBC)

You can download a poster here and a leaflet here