Hattie Briggs will soon be a household name and hers is a real Cinderella story. And you’ll have the opportunity to find out what all the fuss is about ‘close up’ when she plays at Billericay Rectory on Saturday 11 May 2019. Like many of you, I’m always interested in hearing new artists and Hattie sits very comfortably in the Americana genre we’ve come to know and love so much here in Billericay.

Hattie is a 25 year-old singer/songwriter and multi-instrumentalist, originally from Chichester but currently based in London. An independent artist and regular busker at Network Rail stations, she was fortunate enough to be spotted by platinum-selling singer, Alfie Boe, while she was performing in Paddington Station in October 2018. A fan of Alfie Boe since seeing him in Les Misérables a few years ago, she was understandably surprised and thrilled when he came up and put money into her guitar case, and even more so when he messaged her on Instagram complimenting her voice.

Hattie will soon be joining Alfie as the support artist on his 21 date UK tour starting in March in Cardiff and finishing at The Royal Albert Hall in April. In a recent BBC Radio London interview with presenter Jo Good, Alfie said:

Since making the decision to drop out of a Russian degree in her second year at Oxford University, Hattie has released several EPs, two critically acclaimed albums, had airplay on BBC Radios 1, 2, and 6 Music, and embarked on tours around the UK, the Netherlands and the U.S.. Festival appearances include “The Great Escape” Brighton, “Secret Garden Party” and a showcase in the Club Tent at Cambridge Folk Festival.

Hattie was a Radio 2 Young Folk Award Nominee 2014. In January 2015 she won the Laurel Canyon Music awards for Best Debut Album and Best new Artist of 2015. Young Runaway was nominated for Best Album 2016 by Laurel Canyon Music and Hattie was nominated by FATEA for Best Female Artist 2016. In March 2017, Hattie was nominated for the Rising Star Award by folking.com. In November 2017, Hattie was named the first ever winner of Fender Undiscovered Artist of the Year in 2017, Hattie won the prize of supporting Lucy Rose at the prestigious O2 Shepherd’s Bush Empire. Other artists that she has opened for include chart topping duo, Ward Thomas, at the O2 London’s Brooklyn Bowl, Lauren Aquilina, Stornoway, John Smith and Seth Lakeman.

Influenced by Joni Mitchell, Foy Vance and Jeff Buckley, Hattie writes and sings straight from the heart, bringing together pop, folk and electronic influences, which she delivers with honesty and intent. Hattie released her first single “Early Girl” in February 2018 and her second single “Say Goodbye” was released at the end of April 2018.

You have caught a star before she zooms up into the stratosphere. Alan O’Kelly

A House Gig provides a unique experience for both artists and audience in an intimate setting and is quite unlike any other gig you will attend. That’s why artists are always asking to come back! Some of my most favourite gigs have taken place in my lounge!

A House Gig is a private invitation only gig to the Rectory from Paula and myself. You can contact me on revpacman@btinternet.com if you’d like to be considered for a place and I’ll get back to you to confirm your attendance. Maximum two tickets per person – spaces are limited! I usually receive more applicants than places but I do set up a reserve list.

Doors will open at 7.00 pm (or 6.45 pm if you’re so excited you can’t wait or you simply want more drinking time from our reasonably priced honesty bar!).  Hattie will play two sets from 7.30 pm (ish!). We’ll provide some hot food during the interval (with a veggie option) all for the amazing price of £15 (payable in advance, please – I’ll give you details about how to pay when your invitation is confirmed).

A House Gig is a cosy (!?) event and, whilst we provide seating for most people, some of you will be required to sit on the floor – we’ll provide a comfy cushion for you (we have plenty of these) – so you might want to dress accordingly! Just so you know, we always encourage folk to swap around for the second set! 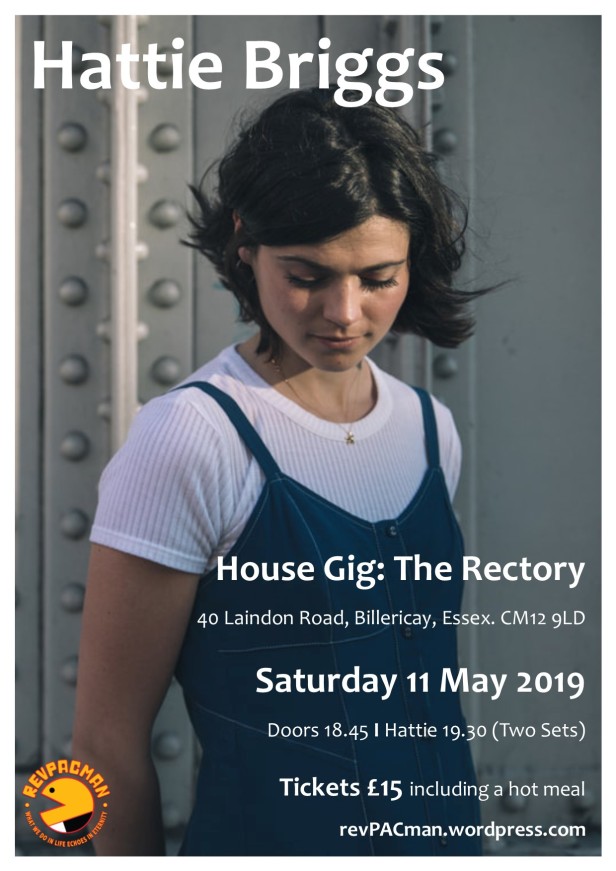