This is a copy of my ‘sermon’ preached on Sunday 30 August 2020. The Bible Reading is Matthew 16:21-28. If you didn’t get a chance to watch this when it was released, you should be able to catch up at Emmanuel YouTube or Facebook.

The closure of Emmanuel and church activities over the past five months has challenged all of us to think more deeply about our Christian faith and the true nature of our worship of God and the role of church in our lives. The greatest challenge of all, it seems to me, is not the loss of familiar church events, but of drifting away from God. It’s said that it takes 10 weeks to break a habit and even longer to create a new one. 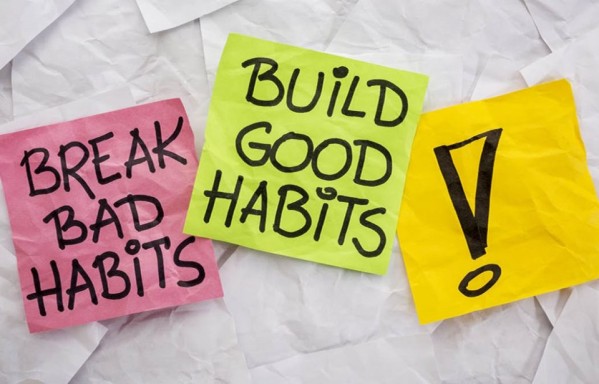 Research suggests that 40% of Church regulars stopped accessing online services after 12 weeks. If that is true, then many church habits have been broken and it will take a long time for us, Emmanuel, and the Church at large to recover what we have lost during lockdown. If you’re one of those who are struggling, be sure to surround yourself with Christian friends / home group members, who will walk alongside you on your journey of faith.

If you’re anything like me, you’ll have some regrets about the decisions you’ve made in your spiritual life over the past five months. We’re all guilty of making mistakes – even with the best of intentions – as we see from our Bible reading today.

Last week, with Bishop Wallace Benn (wasn’t he great?), we saw Peter make his declaration that Jesus was “The Christ, the Son of the living God.” You will recall Jesus responded by saying, “… you are Peter, and upon this rock I will build my church; and the gates of Hades will not overcome it.”

This would have been a high point in Peter’s life. Not only had Peter been given special revelation by God to know the truth, he would be a central figure in building Jesus’ church – a promise that would be fulfilled in the early chapters of Acts. Yet, as we’ve heard earlier, Peter utterly and miserably fails, so much so, that Jesus calls him ‘Satan.’

Whilst the disciples may have begun to understand that Jesus was the Messiah, they didn’t understand what that meant for the immediate future.

They, like everyone else, were expecting the Messiah to set up a military and political kingdom – similar to that which had existed under David and Solomon. But that wasn’t God’s plan for Jesus. He must save mankind from the consequences of their sin.

We see this in vs21, where Jesus’ speaks of what the immediate future would bring. 1) He must go to Jerusalem; 2) He must suffer many things at the hands of the elders, chief priests and teachers of the law; 3) He must be killed; and 4) He must be raised from the dead on the third day. In fact, Jesus tells the disciples of His coming suffering, death and resurrection four times in Matthew’s gospel before He even reaches Jerusalem (Matthew 17:12, 22-23; 20:18-19, 28). They should have understood that Jesus’ death wasn’t going to stop the building of the kingdom of God on earth. But they didn’t.  And so we see that:

It’s clear that Peter didn’t really understand what Jesus’ was saying vs22: “Peter took Jesus aside and began to rebuke Him, saying, “Never Lord! This shall never happen to You.” Now, before we criticise Peter too much here, let’s recognize this rebuke suggests that Peter had a close personal relationship with Jesus. It’s also a testimony to Jesus’ humanity. If Jesus had been the mystical and authoritarian ruler they expected the Messiah to be, Peter would never have done this.

Peter’s rebuke, it seems to me, sprang out of his love and friendship with Jesus as well as his own confusion and pride. It just didn’t make sense to him that Jesus would have to suffer and die. However:

Unwittingly, Peter had become a spokesman for the devil. That’s quite a chilling thought isn’t it? If that could happen to Peter, it can happen to any of us. Satan was using Peter to set a trap for Jesus to lure Him away from the cross.

This was a real temptation because Jesus knew going to Jerusalem meant great personal suffering. But He put His Father’s interests first and wanted His will to be done. That wasn’t the case for Peter and Jesus points that out “… you do not have in mind the things of God but the things of men.’”

This is because Peter responded according to his own emotions, desires, and wisdom, and in doing so, became the adversary of God’s plan. We, too, are subject to the same failure when we allow our emotions and desires to control our thoughts and actions. We must trust in the Lord, not ourselves; commit our ways to Him, not our own abilities; seek His kingdom and righteousness, not our own. 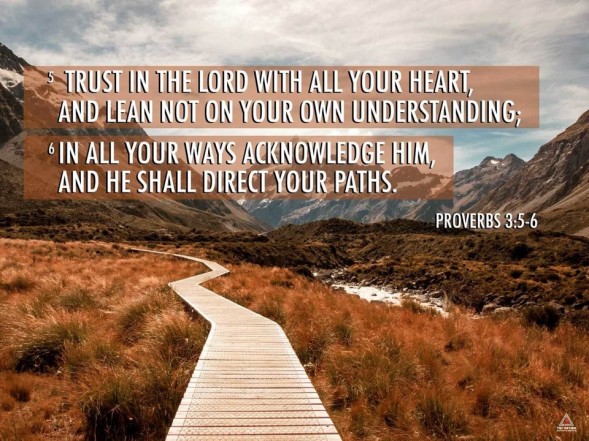 But how can you do that? How can you keep human emotion, desire and wisdom from becoming foolish and adversarial to God’s will? How can you get back on track if you have fallen prey to be used by the devil? Jesus (sort of) gives the answer in verse 24 when he tells us:

Jesus is saying that the responsibility for ushering in God’s kingdom was going to be shared by the disciples and not quite in the way they were expecting. “‘If any man would come after me, he must deny himself, and take up his cross, and follow me.’” I wonder how much the disciples were shocked by what Jesus said and what he was asking of them – and us?

Choice. The first thing God gives us is a choice “If any man would …” God didn’t make us robots and He doesn’t coerce us into following His plan for our lives. He lovingly sets out the reasons why we should follow Him and patiently draws us to Himself.

I spent 10 years in sales and God isn’t a good salesman by the standard of modern marketing techniques of pitch and strategy and persuasion and negotiation and that’s because He tells people what it will cost up front. There are no hidden extras! And we find the cost is extremely high.

Self-denial is the first cost. This means “to “completely disown, to utterly separate oneself from someone or something” and is the opposite of our natural, sinful nature.

The people listening to Jesus knew exactly what He was talking about for they often saw the cross used in Roman justice. Taking up your cross was the act of a condemned man bearing upon his own back the wooden beam upon which he would soon be crucified and die.

When the Crusades were taking place in the 10C to Christianise the Muslim countries, many mercenaries were drafted in to the Holy armies to bolster the numbers but, because they were a supposed ‘Christian’ army, the mercenaries were Baptised before they went into battle. However, those mercenaries wouldn’t let go of their swords when they were Baptised and would hold them up out of the water whilst the rest of their body was covered. It’s almost as if they were almost saying to God: You can have my body/soul but you’re not going to have my sword.

I can’t help but think how much of an illustration that is of a Christian who doesn’t quite give everything to the Lord.  For the mercenaries it was their sword which they held back. What might it be for you? It may well be your wallet/purse, your talents, your time, your heart? It may be holding back because the road ahead looks a bit rough.  What are you holding onto?

Follow me. Following Jesus means you are not ashamed of Him or what He teaches. It’s not always easy to stand up for Jesus when it means you will be despised, mocked, ridiculed and perhaps slandered and persecuted by casual friends, co-workers and relatives – yet that is exactly what we are called to do when we follow Jesus. 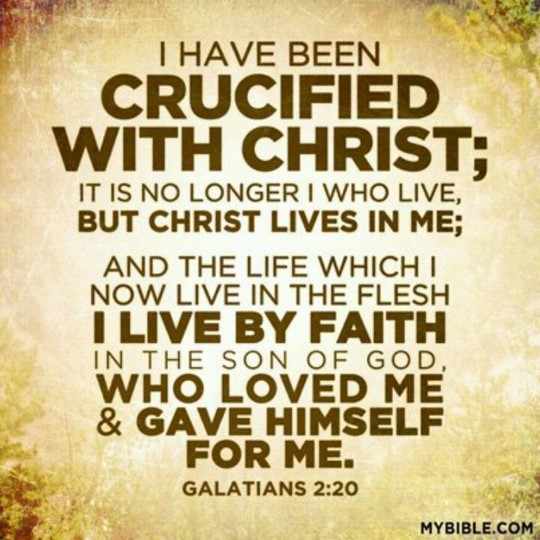 Jesus goes on to speak about the value of our soul. “For whoever wants to save their life will lose it, but whoever loses their life for me will find it. What good will it be for someone to gain the whole world, yet forfeit their soul? Or what can anyone give in exchange for their soul?” If you try to make something worthwhile out of your own life by doing it your own way, the end result will be the emptiness and vanity Solomon talks about in Ecclesiastes. Life apart from God is ultimately without purpose.

The Bible teaches that your life is but a vapour that disappears (James 4:14). It is like grass that grows, withers and dies in a season (James 1:24). But your soul is everlasting and will continue throughout eternity. Simple logic dictates, then, that your soul is more valuable than all the riches of this world or anything you might experience within it.

Jesus had explained to His disciples that He had come to suffer and die in Jerusalem but would rise again. Now He points out a personal hope of what some of them would experience while affirming that their expectations of the Messiah coming as a glorious king, conquering ruler and the righteous judge of all the earth would be fulfilled.

“For the Son of Man is going to come in his Father’s glory with his angels, and then he will reward each person according to what they have done. Truly I tell you, some who are standing here will not taste death before they see the Son of Man coming in his kingdom.” And that’s as true for us today as it was for those first disciples. Jesus wants something for us that will last.

It’s not been an easy passage this morning. It asks us some challenging questions – as have many of the readings from Matthew over the past few weeks. Are you willing to deny yourself, take up your cross and follow Jesus? Do you know the value of your soul? Are you willing to trust your future into God’s hands when you are so confused about what the future may hold?

And you can ‘Keep on keeping on’ doing all of those things because, as I preached in my sermon at the beginning of lockdown on 29 March:

The way you live your life will show to everyone what you believe. As society moves into a new way of living, what a wonderful opportunity we have to show people, many of whom are still extremely nervous and anxious, a different way to live – a life full of hope, purpose and peace of mind. What a precious gift we have and what a precious gift we have to share as we ‘Set Our Minds On (the) Good Things Of God.’ 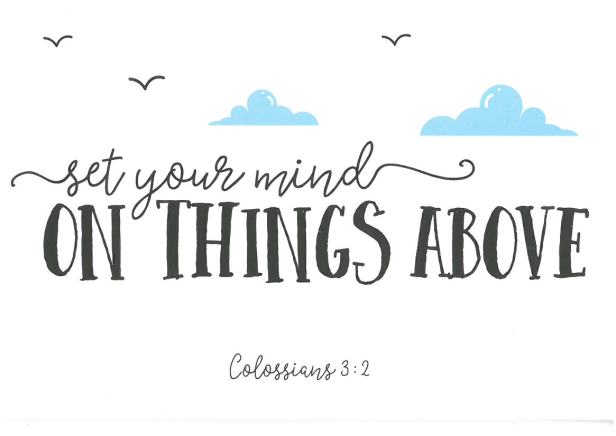 6 thoughts on “Set Your Mind On Things Above”