I’ve been thinking a lot about the achievements of older people in recent days, which made me ask the question: How old is too old to do something new?

If you want to launch a business, become a great leader, change careers, or just do something different with your life, at what point is it just too late to be successful? Short answer: never.

In case you need a little inspiration to show you that it can be done no matter what age you’ve reached, here are some amazing people who saw real success when they were well into, what we might call ‘The Third Age’ and beyond:

Captain Sir Tom Moore
The late Captain Tom had the greatest year of his life when he was 99 years old. He raised £33 million for the NHS, was knighted by the Queen, made a Colonel by his old regiment and touched the hearts and minds of young and old alike across our nation, if not across the world, in the process. Oh, and we mustn’t forget that he was also ‘Top of the Pops’ with Michael Ball and the NHS choir.

President Biden
On Wednesday 21 January 2021, Joe Biden was inaugurated as the 46th President of the United States of America. At 78 years of age, Biden was/is the oldest person ever to be sworn in as President.

Dame Judi Dench
Although Dame Judi Dench has been a stand-out in her work for theatre and TV during her entire working career, she only became a household name in her 60s. Judi has received seven Oscar nominations, all of them when she was over 60. She won Best Actress in Supporting Role in 1999 for Shakespeare in Love. No other actor or actress has collected more nominations when older than 60.

Revd Canon Hugh Dibbens
Hugh is an amazing man and a friend of mine. At 80 plus years old, he’s been a priest in the Church of England for over 50 years … but he’s not slowing down, rather speeding up!  Apart from still being active as Evangelism Advisor in the Diocese of Chelmsford, Hugh will be ‘prayer cycling’ a minimum of 800 miles around East London and Essex, to spread the Good News of Jesus and pray for all the Parishes he visits.

Sir Ranulph Fiennes
Is probably one of the greatest adventurers of the 20th Century: a marathon at 71 is good going, a 156-mile run across the Sahara desert? Climbing Everest at 65?  That’s Sir Ranulph Fiennes for you. Fiennes is a great inspiration for the senior adventurer because he doesn’t make it look too easy.  Heart surgery, diabetes, frostbite and bereavement. He’s had the lot.  He proves that you can keep achieving even if health and family life don’t give you a smooth ride.

Colonel Sanders
The Colonel did not start developing Kentucky Fried Chicken until he was in his 60s. Once his brand was developed and growing, he sold it in his 70s and lived comfortably for the rest of his years.

James Parkinson
At the age of 62, James Parkinson identified Parkinson’s disease. His 1817 essay on ‘Shaking Palsy’ led to our conception of Parkinson’s today. Although others had previously written about shaking palsy, Parkinson’s descriptions were so in-depth that he inspired other pathologists to study the disease.

Frank McCourt
The author, Frank McCourt, only took up writing at the age of 65. His book Angela’s Ashes won both the Pulitzer Prize and National Book Critics Circle Award. It was also made into a movie and there are even museums named after him.

Bands & Musicians
Many of you will know that I have a great love of music and I’ve been thinking about bands and musicians who are still going strong well into their 60′ and 70’s.  Ones that come to mind are: The Rolling Stones; The Who; Aerosmith: The Beach Boys; Neil Young; Eric Clapton; Crosby, Stills and Nash; George Benson; Fleetwood Mac; The Eagles; James Taylor; Carole King; Elton John. I’m sure you could add many more to that list.  But all of these continue to play live and produce great music. In fact, some of them have produced some of their best work in their later years!

Moses
One of the most famous people in the Bible who tasted ‘success’ in his older days was Moses.  He spent 40 years living in Egypt, followed by 40 years in the desert before God used him, aged 80 years old, to release his people from slavery and lead them into ‘The Promised Land.’

Abraham
God promised Abraham: “I will surely bless you, and I will surely multiply your offspring as the stars of heaven and as the sand that is on the seashore” (Genesis 22:17). When he and Sarah finally had a son, Abraham was 100 years old. Their son Isaac didn’t have children until he was 62 years old, which means Abraham had to wait for 87 years from the time of the promise to the birth of his first grandchild. He didn’t live to see God’s promise fulfilled through him.

The above examples, and many more that you could think of, remind us that waiting time is never wasted time. And remember, you are never too old to start a new chapter in your life. As C.S. Lewis said: 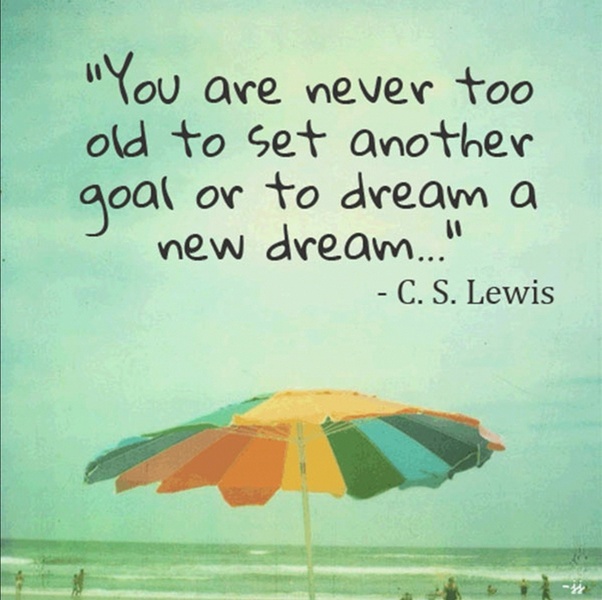 Blessed are they who understand
My faltering step and shaking hand.

Blessed, who know my ears today
Must strain to hear the things they say.

Blessed are those who seem to know
My eyes are dim and my mind is slow.

Blessed are those who look away
When I spilled tea that weary day.

Blessed are they who, with cheery smile
Stopped to chat for a little while.

Blessed are they who know the way
To bring back memories of yesterday.

Blessed are those who never say
“You’ve told that story twice today”.

Blessed are they who make it known
That I am loved, respected and not alone.

And blessed are they who will ease the days
Of my journey home, in loving ways.

8 thoughts on “How old is too old to do something new?”